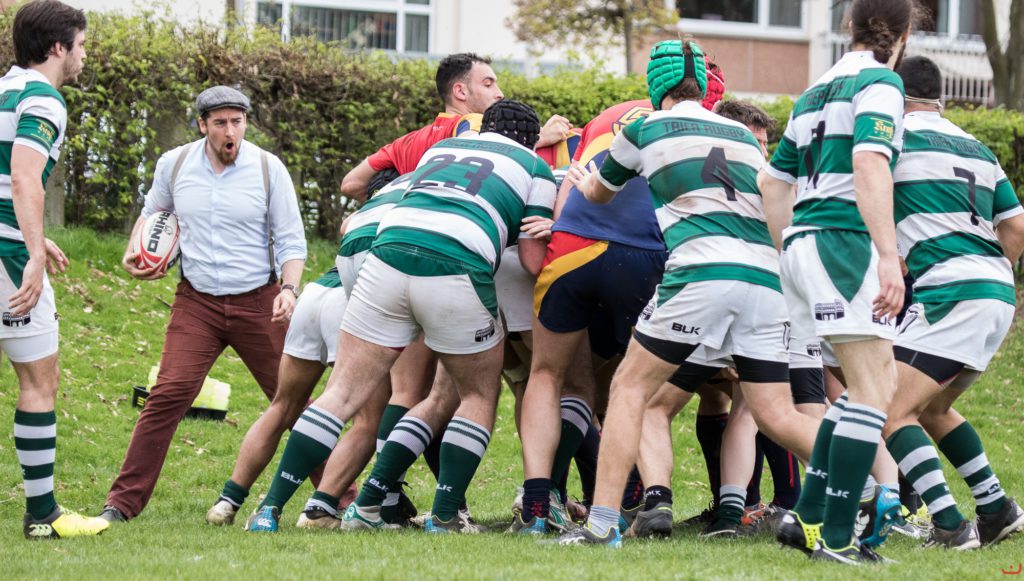 Trier played their first match of the second part of the season against Club Bonn Rhein-Sieg. Much was at stake for Trier, as Trier managed to beat Bonn in the first half of the season and was looking for another win.The game started under a bad omen, as Bonn managed to score a bold try from scrum within the first 10 minutes of the game, putting the home team in the lead. 0-7 for Bonn, with conversion. Trier, however, recovered quickly from this initial attack and countered.

Fly Half, Felix Klormann, managed to weave and bob is way past the defence, rush into Bonn’s 22 and was unfortunately stopped just inches short of the try line. Yet this hearty attack set the mood for the coming 15 minutes in which Trier pushed an aggressive attack, which was dominated by the Trier Forwards, particularely in the standard situation. Soon this unrelenting advance was rewarded with Trier’s first try, scored by Outside Center George Hosu. Unfortunately, Felix Klormann could not convert, meaning the score was now 5-7 still for Bonn. Still, Trier kept attacking, keeping the energies high and as such, saw themselves quickly in Bonn’s 22 again. This time it was Inside Center Marsel Gurra who rolled past the defence. With a successful conversion, Trier now led 12-7. Bonn’s answer came quick and hard, countering Trier’s strong advance with an equally strong attack. Bonn did not only score 2 but 3 tries in the remaining 15 minutes of the first half. Half-time result: 12-24 for Bonn.

Like the first half of the game, the second half started under a bad omen once more as Bonn yet again scored a try within the first 10 minutes of the game. 12-29 for Bonn. Trier still stayed defiant and set up another counter: Newcomer Jonathan Hassel, Winger, saw an opening in the defending line after a brutal attack by the Trier Forwards and used it to its fullest effect, leading up to a 70 meter sprint and a well deserved try. 19-29 for Bonn.

Now the game settled and while Bonn managed to keep their atttack going, Trier blocked all attempts at another try for the coming 20 minutes of the game. With strong defensive lines and a well coordinated kick defence, Trier saw little ground being given away to the home-team. Finally an unlucky error near Trier’s try line, granted Bonn a final try for them, pushing their score up to 19-36.

Yet Trier was not done and so the ball was quickly won back from Bonn, putting Trier back into the attack and with 10 minutes left on the clock, there was still enough time to grab another try and so Trier did. A well coordinated, hard striking march by the Forwards, put Trier back in Bonn’s 22. A quick pass to the Backs, some beautiful hands into George Hosu’s hands and once again, the Outside Center brushed his defenders aside to score his second try of the match. 26-36.

Still Trier was not done and so another attack began with mere seconds left on the clock, pushing once again into Bonn’s territory, forward and ever closer to the try line. This final time, Trier did not score though, loosing the ball by a knock too early and ending the game. Final score: 26-36 for Bonn.

The pictures were taken by Stefan Wiede. More pictures can be found here.