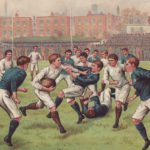 The newsletter for april has just been sent out. If you haven´t received it yet, you can register here.

Learn more about the last or next games, news of the club or Rugby in Trier, Palatinate or the Regionalliga NRW/Rheinland. 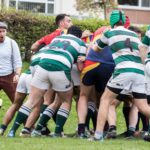 Trier played their first match of the second part of the season against Club Bonn Rhein-Sieg. Much was at stake for Trier, as Trier managed to beat Bonn in the first half of the season and was looking for another win.The game started under a bad omen, as Bonn managed to score a bold try from scrum within the first 10 minutes of the game, putting the home team in the lead. 0-7 for Bonn, with conversion. Trier, however, recovered quickly from this initial attack and countered. END_OF_DOCUMENT_TOKEN_TO_BE_REPLACED

After a one year pause, last Saturday, the 12th of July, the Rugby department of the FSV Trier-Tarforst hosted for the fouth time the Charity Touchrugby Tournament. Thanks to almost one hundred participants and dry weather the tourney was a complete success.

From 12am on the ten teams played against each other on the astropitch Tarforst. In order to provide the teams with as much time to play as possible, the “Cup, Plate, Bowl” system was used. Thus, after the group stage all teams are assigned to one of three groups according to their skills and play for the first place in their group.

On 4pm the last match had been played and the victory ceremony could commence. First place in Cup and therefore winner of the tournament was the team Intercrosse. Second and third place in Cup was awarded to The Scorpions and The Untouchables.

In Plate The Spanish Inquisition could secure the first place for themselve and in Bowl the same could be accomplished by Trial by Combat.

We would like to thank all helpers, players, guests and sponsors. Without them there would have never been such a great tournament. As soon as we have calculated the revenues, we will donate all earnings to nestwärme e.V.

On the 12th of July 2014 for the fourth time the Charit Touch Rugby Tournament will take place at the FSV Trier-Tarforst’s astro pitch. All proceeds will be donated for a good cause. This year the social network nestwärme e.V. will receive the tournament’s profit.

The social network nestwärme e.V. supports families with handicaped, critically or terminally ill children. You can find more information about the association under www.nestwaerme.de

Touchrugby is a variation of rugby which is played without tackling. Therefore everbody can play – amateurs and pros, young and old. The aim of the game is, as in real rugby, to put the ball in the opposing tryzone. Who gets touched by an opposing player has to stand still.

How you can join?

It’s really simple: Just form a team with at least five players and take part in the tourney. Per person there is a entry fee of 5 Euro, which will be donated to nestwärme e.V. To guarantee the fun charakter of the event, only 2 professional rugby players per team are allowed. Of course you will get advice from an experienced rugby player, who will explain you the game and its rules. If you want you can even join one of our normal trainings to prepare for the tournament.

To register and for more information just write an email to: charity@trier-rugby.de
Deadline for registration is the 08th of July 2014